Wow, I don’t know what to do with myself now that I have a day off. It reminds me of the part in Office Space when Lawrence asks Peter “What would you do if you had a million dollars?” and Peter replies “Nothing. Absolutely nothing.”

I did spend a little time working on the website today. I finally got around to adding some of those cute little buttons that everyone else uses (look on the right side, under Links). I stole most of them from Taylor McKnight’s site. On that same site, there’s a like to the origin of these buttons at Antipixel.com. I never really knew how that all got started.

Thanksgiving was great. We had lots of good food with grandparents and parents. I’m really looking forward to making turkey and dressing tomorrow for family and friends. I even got a call from Michael yesterday evening. It’s always good to catch up with everyone around the holidays.

I can’t wait to have people over for turkey and dressing tomorrow. Look for pictures of turkey and friends (our friends, not the turkey’s friends) tomorrow afternoon or evening.

Geoff and Tony are both in town for Thanksgiving. Last night they stopped by for a visit and we went out to eat at Denny’s with Ben and Paula. Here we are all posing while Paige takes a picture. 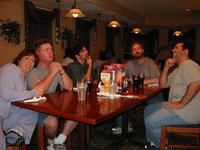 It took over an hour for them to make our food, so we had plenty of time for socializing…

Warning, this post is going to be mostly written in the language of the geek. So, if you’re not one of us, please let your eyes go out of focus and scroll on down to the nice posts about turkey and graduation…

I’ve been using RedHat’s new “community-supported” distribution Fedora since the day it was announced. Now that Fedora-Core-1 has been released, I’m using it full-time. Everything was going great until I installed the NVidia drivers for my video card. Here are a few tips for anyone else having problems.

First, the NVidia drivers don’t include modules for the Fedora kernel. Luckily, the installer will compile them for you if you have everything set-up correctly before you start. Here’s what you need to do:

Now we need to edit the XF86Config file so X will actually use the new driver. I normally use VI for editing files, but for these instructions I’ll use nano since it’s easier.

If you restart X right now, it will come up, but anytime you try to run a 3D application you’ll get this message Xlib: extension “XFree86-DRI” missing on display “:0.0”

I found a solution for this on the nV News Forums. Here’s what you need to do now:

You can now restart X and have good 3D acceleration. Type “telinit 5” to restart the login manager and get back into GNOME.

I’m sure this will make someone very happy one of these days. I still get e-mail about the last bit of technical advice I posted.

Yesterday was my last chance to actually learn something in college. Unfortunately, that didn’t happen. That’s right, classes are officially over for me. All I have left to do now is take a final exam on Monday and give a presentation on Dec. 3.

It’s funny, I’ve been taking classes in Commerce for the last two years now and all I got out of it is several thousand dollars of debt and a silly piece of paper to hang on the wall in my office.

Of course, that degree on my wall will translate into a lot of money for me, but you get the idea.

One more thing – there will be turkey and dressing at our house the Saturday after Thanksgiving (Nov. 29). Pretty much anyone who reads this site is invited, unless you’re some kind of crazy internet stalker…

Since I got 3 comments on my previous post about being sick, I thought I’d better put something up here to tell all of those concerned that I’m feeling better now.

Also, I (finally) got my graduation information in the mail today. Everyone needs to be there December 13th. Yes, everyone.

I only have to attend classes 6 more times until I graduate. I can’t wait for it to all be over.

The final in my other class is going to be the Monday before Thanksgiving – November 24. I wish I could go ahead and take it today, but I guess after working and going to school for two years, I can wait another two weeks.