Pictures of last night’s show are now up on the Breakout Entertainment website. This address will take you straight to the pictures – http://breakout.tamu-commerce.edu/colin_brad_show.asp.

I grabbed the two pictures of us and uploaded them here: 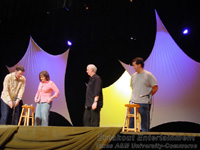 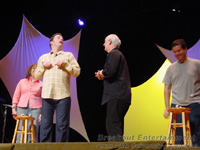 You’ll notice in some of the other pictures they’re reading lines off of cards. They passed out those cards to everyone in the first few rows. We all wrote a single line of dialog and then turned them back in.

The cards were used in a sort of Shakespearean play. In it, Brad played King Portfolio who was worried about war and money. Colin was his loyal subject Epiglottis. As the play went on they would draw cards at random from a basket and read the line.

Out of all of the cards in the basket, they somehow managed to pick both mine and Paige’s. Mine said “Why do men have nipples?” and Paige’s said “What would you do with that?”

To celebrate, we went to see Colin Mochrie and Brad Sherwood perform last night in Commerce. In case you don’t recognize the names, they’re two of the guys from Whose Line is it Anyway?. Here’s a picture of them:

We had so much fun last night, I don’t really even know where to start. We got to Commerce a little after 5:00pm and went out to eat first at the Panda. The whole time we were eating, Paige was trying to hurry me up so we could get to the show early (it didn’t start until 7:00pm). Finally, I finished my fortune cookie and we drove over to the school.

We got to the auditorium before 6:00pm and about 7-8 people were already in line in front of us. We stood around anxiously until they finally opened the doors at 6:30pm. We handed our ticket stubs to the girl at the door and raced down to the second row. We sat next to the aisle since those people are the most likely to get picked to go on stage.

The show was great, I don’t think I’ve laughed that hard in a long time. Of course it was all made up on the spot and it was all hilarious.

The best part of the show (for us anyway) was when Brad Sherwood walked over towards our side of the stage and said “OK, show of hands. How many married couples do we have here tonight?”. Paige and I both immediately raised our hands. Brad looked right at us and said “You two are married?” I don’t remember if I said yes or just nodded my head like a fool, but I did answer him somehow. He turned to another couple in the center of the front row and said “You guys are married, too?” Then he turned back to us and said “Ok, you two come on up and help us out.”

Once we got up on stage, introduced ourselves, and shook hands, they explained the skit. It was called “A Day in the Life of a Married Couple.” Paige and I were standing on opposite sides of the stage. We each had a bell (ding!) and a duck call that you squeeze like a horn (honk!). Brad would play the part of me, and Colin would be Paige. Whenever Brad said something that I might say, Paige would ring the bell. And if he said something that I would not say, she would squeeze the duck call. I would do the same for Colin.

Being on stage was basically just a blur, I don’t remember exactly how it all went. But, I know the skit started off something like this:

Brad pretends to be asleep and snoring.

Colin enters with breakfast and says “Good morning dear. Time to wake up.”

“But I brought you this apple…”

The morning routine continues on for a while until they finally wind their way around to our love life:

Brad replied “Yes, our love-making goes on for hours and hours.”

Honk! (At this point I blushed as everyone really laughed.)

Somehow, things went a little off course at this point. I’m not sure how we got here, but this is how it ended up:

Colin says “I’ll put on my cheerleader uniform like you always wanted.”

(Paige and I are both laughing so much I don’t think either of us did anything.)

Brad dances around like an ape and says “Who’s your monkey!”

There’s nothing in the world more fun than being embarrassed on stage in front of about 1,100 people.

I’m just going to have to add a “music” category to this site. It seems like every day I stumble accross some crazy new band.

This band is a cross between Metallica and the Beatles called, you guessed it, Beatallica. They do covers of Beatles songs in the style of Metallica and with lyrics sort of inpired by both.

So far my favorite songs are Sgt. Hetfield’s Motorbreath Pub Band and I Want To Choke Your Band, but I pretty much laughed at all of them. I would probably enjoy it even more if I knew more Beatles songs…

In case you haven’t heard by now, rumor has it that John Woo is making a Metroid movie to be released in 2006. Here’s an article at E! Online with some more information – Woo’s Next Target: Metroid
.

In honor of the upcoming movie, I’ve been playing a little Metroid on the computer: 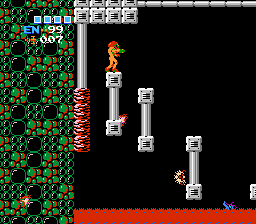 It’s amazing how much time I wasted on that game growing up. Good times.

While we’re on the subject of Metroid, I should also remind you of the Minibosses. I think I’ve mentioned them before on the site. They’re a rock band that plays music from old video games. They do great covers of some of the music from Metroid. Unfortunately, none of the Metroid songs are available for download on their site, but if you look around long enough you’re bound to find them online…

Let me start off by saying I like Nickelback. When one of their songs comes on I don’t turn it off. Most of the time I actually turn it up. (I also sometimes listen to Puddle of Mudd, but that’s a whole different story.)

With those facts in mind, this is just a little creepy. I’m not sure who made this, but it’s pure genius. It’s Nickelback’s Someday in the left speaker and How You Remind Me in the right speaker. I recommend you right-click the link below and “Save As” to listen to it.

How You Remind Me Of Somday

The similarities are creepy. They obviously have a good formula for writing hit songs…

Let me know if the link quits working and I’ll upload the file to my server.

Thanks to Metafilter for the link.

There’s a photomosaic of the Americans who have died in Iraq since the “war” began at Michael Moore.com.

Thanks to BoingBoing.net for the link.

Here’s a newsflash: according to CD’s aren’t selling very well.

Global music sales fell 7.6 percent in 2003 to $32 billion, the steepest decline since the advent of the compact disc

Of course, the record companies blame things like “rampant piracy.” I have my own theory – people don’t like paying for crap. And trust me, most of today’s music is nothing but crap.

While we’re on the subject of today’s music…

I was in a junior high classroom today working on a teacher’s computer.

The teacher noted that the computer was “just crap,” and all of the students in the room giggled. The teacher apologized, to which one of the students replied “it’s OK, we all say crap.” This was followed by a chorus of other children repeating the word.

In a feeble attempt to impress the kids, I added “You do know where the word crap comes from, right? The inventor of the toilet was named Thomas Crapper.” (Now that I’m back at my computer I see that I may have misled them a bit, but Thomas Crapper was a famous plumber.)

At this point a girl in the front row said “I can tell you where the ‘s’ word comes from.” Thankfully, the conversation ended there.

Ever wonder what it’s like to be a network manager? Well, wonder no more…

I noticed a little problem with one of the servers at the high school today. This is the server that holds all of the students’ home folders. Here’s a breakdown of how much space is used by each grade:

Not too bad, except for the fact that all of these files are stored on a 16 GB partition. Do the math and you’ll find that even with compression, that drive is full. Oops.

Now I have the thrilling task of digging through about a thousand student folders and deciding what to delete and what to keep. But it’s really not that bad. I always find the strangest things in student folders.

For example, one student downloaded a program and installed it to his folder on the server. They aren’t suppossed to do this, but many do it anyway. He must’ve been afraid someone would find the program and delete it. After he installed it, he made 40 copies of the complete installation directory. That just made it even more obvious.

What else can you say about Kurt Cobain? I really believe he changed the world.

Many friends recall Cobain saying he would one day join the “27 Club” — a reference to the age Jim Morrison, Janis Joplin and Jimi Hendrix were when they died.

For Kurt Cobain, A Sleepless Nirvana

Here’s an interesting page I stumbled across earlier – Bill Gates and Petals Around the Rose. This page describes a dice game that people having been playing since at least the 70’s. It’s a fun little mental exercise.

First, you roll five six-sided dice (5d6 for the hardcore D&Ders), then you guess the answer. There are only two rules:

I did a little Googling and found a Flash version of Petals Around the Rose. With this you should be able to play the game long enough to figure it out.

It took me about 30 minutes plus a page of graph paper full of notes to finally get it.

Just be careful if you decide to do your own search, some sites give away the secret. I wouldn’t want to have to give anyone a zero on this quiz for cheating.