There’s only one thing better than a day off from work because of snow… TWO days off because of snow. We got another little ice storm around here so I won’t be going back to work until at least Thursday.

I spent a while thawing out my car earlier today and even took some pictures. Once I get them uploaded, I’ll post them here.

We’ve added a Petfinder.com search bar to the bottom of the page. They have all kinds of animals up for adoption, everything from dogs and cats to horses, pigs, and reptiles. Paige even picked out some baby turtles for us earlier today. Just select what kind of pet you’re looking for from the drop down list, type in your zip code, and click Go.

As of yesterday, everybody in Paris has to dial the full 10 digits to make a call. There’s a new area code coming to town, so we all have to change our ways.

I woke up yesterday morning and tried to check my e-mail, but my dial-up connection wouldn’t work. The error message said the line was busy. I didn’t think much of it at the time since my ISP is a little flakey.

Later, I came back and tried again. I still couldn’t connect. Then it hit me, I have to tell Dial-Up Networking to dial the area code. Once I did that it connected right away, and I swear my connection seemed about twice as fast. I guess that means a lot of people haven’t figured it out yet.

All I can say is I would hate to work for an Internet Service Provider in the morning. I’ll bet they get swamped with calls from people who haven’t been able to connect all weekend.

After reading the article about me in the paper a few weeks ago, some people told me that they were surprised that I thought of myself as a geek. I guess some folks just don’t know me very well. Luckily, Paige knows I’m a geek and she loves me for it – 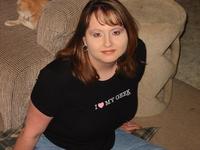 I’ve always been a geek, and I’m sure I always will be.

There was a story a few months back about a Microsoft employee who stole software from the company and sold it himself. The guy managed to make a few million dollars before Microsoft caught him.

According to Yahoo News, the man has died before he even got a chance to stand trial.

It’s funny, everyone made a big fuss about Ellen Feiss, the girl in the Apple “Switch” commercial who looked stoned, but no one ever said anything about Steven the “Dell Dude”. I always thought if anybody was on drugs, it was him. It seems that I was right, according to CNN.

I wonder how much longer Dell’s “Who is Steven” web page will be available? Oh well, maybe Dell will start including free Twinkies with every new computer instead of a free CD Burner…

I haven’t said anything about the shuttle yet, so I guess it’s time I posted something.

I still remember when Challenger was lost. I was only 10 years old, so I think I was in the fifth grade. I remember being in a class room and someone rolled in a TV and we all watched in horror as the shuttle exploded. I went home after school and that’s all that was on TV, just the shuttle exploding over and over. My mom bought a copy of the newspaper with that picture on the cover and I’ve kept it to this day.

Things were different back then – I never thought about war or terrorism or anything like that. These days we see terrible things on TV every day. It’s almost common now to see something blow up, or at least see the aftermath of destruction. But watching Columbia break up on reentry was very different. Not only were 7 lives lost, but the future of our space program was again put in jeopardy. Humans are natural explorers and investigators, and I believe that space exploration is one of the most important things we can do. Hopefully this event will spur strong support for NASA and we’ll be able to finally replace the 20+ year old shuttles.

If you haven’t been following the investigation, there’s an article in Aviation Week that sums up the progress so far. It’s worth a read.

I guess I need to put the newspaper article from this tragedy in the scrap book with my clippings about Challenger. Hopefully I won’t have to open that book again for a long time.

I’m really tired of looking at that soup everytime I come here. It was good soup, but it’s time for something new.

I came across an article today on Slashdot explaining why we hiccup. Anyone who knows me very well will understand that this is particularly interesting to me because I seem to get the hiccups all the time. The article indicates a relationship between hiccupping and suckling. You can draw your own conclusions about what that says about me since I hiccup all the time.

My birthday is only three days away. I’ll be 28 on February 9. I was planning on retiring by the time I turned 30, so I guess that means I need to really start investing soon. My birthday present came in the mail today. It’s a GeForce3 Ti 200 video card. It’s not exactly top-of-the-line, but it is the best card you can buy for under $100.

Classes are chugging along pretty well. I’m building circuits and programming PICs in Advanced Electronics, planning complex software to solve business problems in Systems Analysis and Design, and doodling in Introduction to Statistics. This is my last big semester, so it’s all down hill from here.