Today was the last day of school for all of the students, so obviously yesterday was the day that everything went wrong…

It began around 10:30am yesterday morning. I started getting calls that e-mail wasn’t working. It had been working earlier, so I just assumed that we were being flooded with viruses from the outside again (it seems like this happens weekly).

A while later I realized that I couldn’t even get into the server over the network. So I drove to the high school to check it out. Once I got there, I realized the C: drive on the mail server was full. Windows isn’t smart enough to rotate log files automatically, so I had to delete a few hundred megs of log files. It was almost lunch time by now, and I figured everything would be fine, so I went to lunch.

When I got back to my office, the server still wasn’t working right. So I tried the next logical thing with a Windows server, I rebooted. After the server rebooted I recieved a few e-mails from earlier in the day. I called a few people and let them know that we were back in business.

Then, about 5 minutes later, everything went down – the mail server was gone, the internet was down, big problems. So I drove back to the high school. The problem was obvious as soon as I opened the door to the server closet. Instead of the deafening roar of a thousand cooling fans, I was greeted with absolute silence. The power was off.

Everything in our server closet was plugged into one circuit and it was overloaded. Some guys from our maintenance department came over and reset the breaker, but it immediately tripped again. So I started borrowing extension cords and power strips and trying to get things moved over to outlets on different circuits.

In the end, I split everthing between three different circuits and got things going again. This involved an extension cord strung accross the floor of the library, and a few power strips plugged into power strips to reach the other side of the server closet, but at least we were operational.

Thankfully, we were able to find an electrician who could help us out right away. They put in four new dedicated circuits in the server closet yesterday. The were finished by around 5:30pm so I was able to get everything moved back around and ready to go for today.

Everything was smooth sailing today and we should be in good shape for a while now. Oddly enough, I don’t think the students even knew there was a problem. They all got out at 12:30 yesterday and things were back to normal today.

It’s days like this that make me miss Dr Pepper…

Tomorrow is my last day of teaching a class for this school year. It’s been quite a learning experience for me. “Make it up as you go along” is not a good teaching style for a first-time teacher. Hopefully next year I’ll have a textbook, that would’ve really helped. Besides that, I guess I just got tired as the year went on.

I think I’ve been just as burned out as the students for the last few weeks. Teaching the class was fun, but I’m glad it’s over. I’ll be doing it again next year, but I’ve vowed to not teach it from 12:00 – 1:00. That’s the worst possible time for me. By noon I have to come home and relax for a least a few minutes or I just can’t make it through the day. I don’t see how real teachers do it.

You can always tell the new people on eBay, they tend to bid like this: 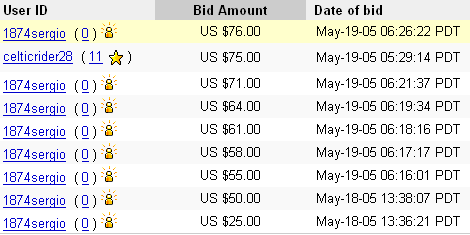 Decide what you want to spend on something and put in that amount. Otherwise, you get caught up in the game of always trying to outbid everyone else. That’s how people end up spending more for something used on eBay than it would’ve cost them to just go buy it new.

Here’s how I tend to buy things on eBay. It works pretty well for me.

If there are no bids on an item and I know exactly what I’m willing to pay for it, I’ll just go ahead and bid that amount. If I get outbid, I just forget it. Everything comes back around on eBay, just wait a few days.

If there are bids already, I’ll watch the item and wait until the auction is almost over. If someone else has already bid and you bid against them, you’ll often end up with a situation like the one above.

I really don’t like being the high bidder during the last few minutes of the auction. I would much rather just walk in with about 10 seconds to go and put in the amount I’d like to pay for the item. That way I might win and I might lose, but I know I won’t go crazy and spend too much. There’s much less stress that way.

I’m selling off another batch of things on eBay. Besides simplifying my life and cleaning out my closets, I’m also saving up to buy a PowerBook. All the cool kids are using PowerBooks these days, and I want one, too.

If anyone asks, I’ll probably tell them that I’m selling all of this stuff to pay for Matthew’s diapers and formula. People are usually more willing to pay more to support a child than they are to support my computer addiction…

I received my copy of the Dave Matthews Band‘s new album Stand Up on Tuesday. I pre-ordered it online so I could get the 5-track bonus disk and a sticker. To me it was well worth it. Of course, if Dave Matthews put out an album of pan flute music I would buy it, so maybe I’m a little biased.

This the first album I’ve purchased as a “Dual Disc”. It’s a CD on one side and a DVD on the other. Hastings is selling the Dual Disc and the regular CD for the same price. The DVD side has a 20 minute movie on the making of the album that’s actually pretty interesting. I was a little concerned when I turned the case over and saw this on the back:

That sounds kinda scary to me. So far it’s played in my home stereo and my car. We’ll see how it does when I try to rip it with iTunes so I can listen to it on my shuffle.

Overall, I like the new album. But, it’s different from their other stuff. The days of folksy acoustic guitar songs are over. They worked with a new producer on this album – Mark Batson. He comes from a hip-hop background, and it shows on this album. Their older stuff had an almost live feel, everything sounded very natural. This album sounds like a lot of it was done in Pro Tools. Not that it’s bad, just different. It seems like this album is missing a little of the energy that their earlier stuff had so much of.

I find myself listening to their live albums more than their studio albums these days. I’ve already taken Stand Up out of my car and put Live in Chicago back in. That’s what makes the Dave Matthews Band so great – they can play the same songs every night yet still add something new each time. I’m really looking forward to hearing some of the new songs on a live album. I think performing these songs together as a band, in front of an audience will really make a difference.

Things that scare me:

People who talk with both hands… while driving.

Three day weekends are great. I think I need to find a way to take every Monday off. I finally have a little time to catch up on some things.

I have junk that I’m selling on eBay piled up in the floor of my office. That’s surrounded by three computers that need to be fixed by the end of the day. I have a doctor’s appointment in thirty minutes, I just finished getting the oil changed in my car, and I’m going to mow the yard when I get back.

Actually, I guess it’ll be kind of nice to go back to work tomorrow so I can relax.

At first I thought Frances sent me an actual photograph of herself, but then I recognized the background from Paige’s South Park picture. 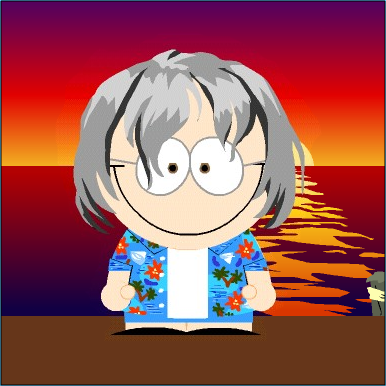 Here’s Paige’s self portrait as a South Park character at the beach. I think she did a pretty good job. 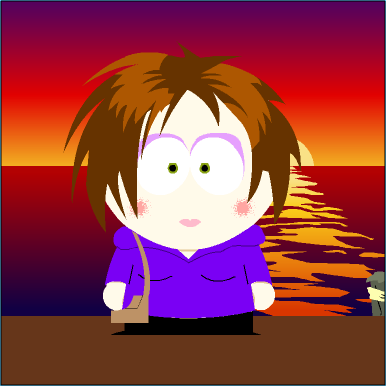 See the previous post for my picture and a link to the site where you can make your own South Park character.

Here’s what I think I would look like as a South Park character: 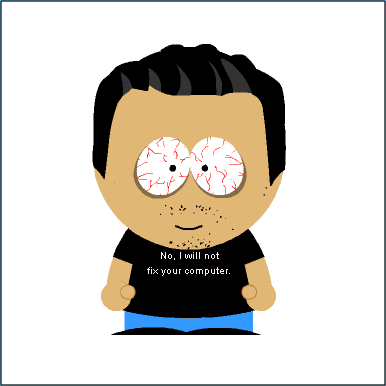 Let me know how I did. Also, create your own South Park character at http://www.planearium2.de/flash/sp-studio-e.html.