I finally finished typing up all of the materials for my PC Basics class this Friday. I’m not sure how long it is since I’m too tired to actually total up the pages right now. I’m just glad that this is finished so I can move on to something else…

Just in case you’re interested and you haven’t heard – the trailer for Joss Whedon’s Serenity is now available at Apple’s Movie Trailer Site.

This is, of course, the movie based on Whedon’s short-lived Firefly TV series. It looks pretty good to me. I guess we’ll find out for sure on September 30th.

Geoff loaned us his box set of Firefly a while back and I’ve enjoyed all of it that I’ve watched so far. Hopefully if the movie does well, someone will bring back the series.

So far I’ve typed up about 55 pages of content for the PC Basics and Troubleshooting class I’m teaching this Friday. By the time I’m finished I should have around 80 pages of content plus a 20 question quiz at the end. Hopefully I’ll be able to get this done over the course of tonight and tomorrow at work.

We’ve had a really busy weekend so I haven’t had much time for updates around here. I know you’re probably bored and looking for something to do, so I thought I would help you out with a few “mind expanding” websites:

Mentat Wiki – This wiki is a collaborative environment for exploring ways to become a better thinker. They have some neat stuff on memorization and mental math that I really need to work on.

Be A Genius (…or just look like one) – This site is dedicated to teaching you to effectively improve and display your mental prowess. This looks like some more interesting stuff. I actually haven’t dug too deeply into this site.

So there you go. I expect everyone to tell me the value of pi to at least 100 digits the next time I’m around…

Matthew used to get mad when it was bath time, but I think he really likes it now. Here’s a perfect picture of him right after a bath a few days ago:

He splashed in the tub with his feet a little last night. I’m sure it won’t be long until he’ll be splashing water all over the floor.

I’m always looking for better ways to organize my stuff. The problem is, I have lots of it. I have bookshelves and boxes overflowing everywhere.

What I would really like is a nice system of shelves that could possibly cover an entire wall. That way I would be free to organize things however I wanted while keeping everything within reach.

Finally, someone came up with the perfect solution for me. And, they made it extremely geeky: 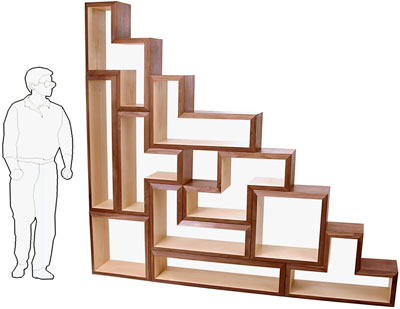 That’s right, Tetris Shelves. Why didn’t I think of this. There is one unfortunate drawback to these shelves – they cost $7,000 for 10 pieces.

Oh well, maybe I’ll get inspired this summer and build a few of these myself…

It seems like I’m on some kind of strange “how we talk” trip lately. Anyway, here’s my Liguistic Profile:

Find out how you rate at What Kind of American English Do You Speak? Yes, I have been known to say ya’ll. I’ve even uttered “fixin’ to” on a few occasions…

Now I just need to go back through the test a few times and figure out what I’m supposed to be saying in those situations. Doesn’t everybody push a buggy, bring home groceries in a sack, and drink Coke (even if it’s Dr Pepper)?

Yes, April 15th was Paige’s birthday. Thanks to everyone who bought her things from her wish list. It’s much shorter now than it was before, and she got lots of nice gifts.

We spent most of yesterday in Dallas. For her birthday dinner, we went out to eat at Arcodoro & Pomodoro. This was, without a doubt, the nicest restaurant I’ve ever been in. Paige had the Ravioli Arcodoro, voted the best ravioli in the world. It was stuffed with a mix of cheeses and seafood and topped with crushed pistachios.

I had the Stinco di Vitella Logudorese (yes, I copied and pasted that from their website). It was the most amazing veal shank. The waiter told me that the proper way to eat it is to scape the marrow out the bone when you’re done and mix it with some of the risotto. He even brought out a little marrow scraping fork. Paige and I both tried it, but I’ve got to say that the meat was much better than the marrow.

I’m sure we looked totally out of place in that restaurant, but everyone there treated us very well. I’m sure we’ll go back from time to time since the food was so good. Unfortunately, a meal there costs about as much as we usually spend on groceries for a week, but I think it’s worth it. You’ve got to live a little sometimes.

Dude, this is like the coolest site ever – Eighties Speak.

I can’t believe people used to talk like this. Thank god I never talked this way. Psyche!

Matthew is getting pretty good at rolling over now. Here he is practicing on his cloud blanket.

If he keeps going at this rate, he’ll be crawling soon.