Our new dog Jack passed away at 10:30 this morning. The vet said he was just too weak and had been abused for too long. We got him less than a week ago, but we were already very attached to him. He was the best dog we had ever had. I’ll miss him.

In case you haven’t heard, we have a new member of our family. He’s a two year old Cocker Spaniel. We adopted him Wednesday night. Unfortunately he was not taken care of by his previous owners. His hair was matted beyond belief and he was very skinny.

We worked on getting the matts out of his hair for about three hours Wednesday night and again for a few more hours on Thursday. He also made a visit to the vet on Thursday for his shots. He’s still not in good enough shape to put pictures up here. Thankfully, he has an appointment with the groomer Tuesday morning. After that I’ll put several before and after pictures up.

Now, about the name. His previous owners called him Midnight, but we thought that was kinda long for a dog’s name. He didn’t respond to it anyway. So we’ve decided to go with Jack. I wasn’t too sure about it at first because you just naturally call him Jackie sometimes and I was afraid that was a little too femine for him. But, then I remembered Jackie Chan so I’m OK with it now.

A few days ago I added a new gallery to the site. It’s only one page right now, but it will eventually be full of pictures of our cat Sam. Here’s a sample to get you started – 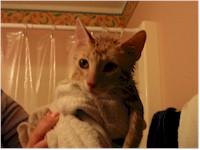 This is Sam right after a bath. We think he’s cute, let us know what you think.

Here is proof positive that good things do occasionally happen to good people.

The only other happy couple we know, Ben and Paula on the couch – 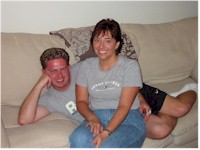 Everything seems to be going his way right now, but at least I know I beat him by one point on the SAT…

I finally got around to picking my favorite Scarborough Faire pictures and uploading them today. Out of the 100 we took, I picked 24. I decided it would probably be better to split them up, so there are four pages of pictures. Click the picture below to get started. 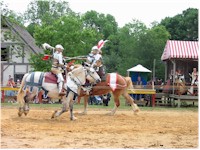 Also, I haven’t added any witty comments to these pictures yet. You should be able to tell what’s going on, but check back later for a description of each picture.

Well, we had a great time at Scarborough Faire. And we somehow managed to take exactly 100 pictures. I’m still going through and trying to pick out the best of them to put up here.

In the mean time, I finally got around to posting the sleeping gallery. Here’s a sample – 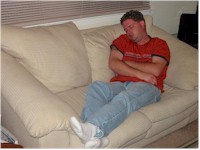 This is Ben doing what he does best. Click the picture for the rest of the gallery.

Tomorrow we’re going to Scarborough Faire! I can’t help it, we’re geeks and so are our friends. I’m taking the camera so I should have some pictures up in a few days. Maybe Paige will take one of me eating a turkey leg.

Here’s a picture of Sam showing off his jumping and wall climbing. Paige is a professional cat handler, so don’t try this at home. 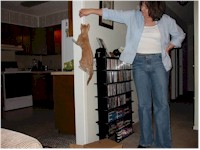 I’m still working on getting the rest of the galleries together. I have some nice sunset pictures, and my infamous “sleeping” gallery. Don’t fall asleep on our couch or you’ll find yourself here…

Hang around me long enough, and eventually anyone will be tearing things apart. Here Paige demonstrates how easy it is to install 128 MB of DDR RAM in her computer. 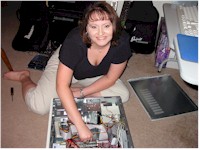 In the background you can barely make out my Ibanez guitar and Mesa-Boogie amp. I guess I’ll have to add a music gallery one of these days.

Don’t worry, we’re still here. We’ve just been really busy lately. Finals are next week for me. My Data Structures class has been pretty easy so far, but I’ve actually had to study a bit for Discrete Math. Still, unless there’s some catastrophic failure in my brain I should maintain my 4.0.

After this semester I’ll have about two weeks off, then it’s back to school for two summer semesters…

In other news, I recently bought a 64MB Memory Card for our camera. Now I can take pictures ’til the cows come home. For those of you who’ve been to Paris, you know I mean that literally.