I spent last Wednesday in Plano attending the second meeting of Refresh Dallas. This is a group of web designers who all get together once a month and share the tricks of their trade. I was a little out of place here considering I’m more of a programmer, but I still feel like I learned a lot.

The presentation was by Josh Williams of Firewheel Design. He’s the guy behind sites like IconBuffet and . The topic was Branding Web 2.0. It was a great discussion about how he designs and develops brands for web applications.

If you’d like to see pictures, there’s a RefreshDallas tag on Flickr.com. You can see me hanging out at the back in this picture. I actually took a solid page of notes during the presentation, but I left them in my office. I plan on typing them up when I get a chance. In the mean time, I think Alex Muse took a picture of every slide.

Next weekend, I’ll be attending BarCamp Dallas. I’m thinking this will be a little more my style. I don’t plan on sitting at the back at BarCamp. That’s actually one of the requirements for BarCamp – active participation. Everyone is expected to participate. It should be a lot of fun.

Steve Jobs gave his annual keynote at MacWorld San Franciso today. This is usually when he tells all of the Apple computer lovers what they’ll be doing with all of their money for the next few months. This year’s speech was no exception.

First off, he introduced new versions of all of the iLife applications. Right now I’m most interested in playing around with the new version of iPhoto. We still mainly use Picassa on Paige’s PC for all of our digital pictures, but I think this update to iPhoto might change that. Also, there’s a new program called iWeb that makes it easy to set up your own website with picture galleries, movies, and podcasts.

Next up, the new iMac with an Intel processor. This is the Intel Core Duo – basically two processors in one. The new iMac is the same design and cost as the old iMac, only it’s 2-3 times faster. It’s everything you could want in a computer starting at $1299. Sounds good to me. I’ll take two.

Finally, he closed with the best news of all – the new MacBook Pro. A 15″ laptop with the new Intel Core Duo processor starting at $1999. Again, it’s the same basic design as the PowerBook G4 and the same price, only the MacBook Pro is 4-5 times faster.

I imagine both of these computers will be flying off the shelves for quite some time. The 15″ PowerBook was always my dream computer and now it’s about 4 times faster. Maybe one will fall off a truck in front of our house, or maybe I’ll convince the school district to buy me one…

I talked a lot yesterday about Sony’s new copy protected CDs that basically install a virus on your Windows computer. This has been a pretty hot topic on a lot of weblogs for over a week.

According to News.com, Sony announced today that they are halting production of CDs using this technology.

There’s a new virus infecting Windows computers these days. It hides itself deep within your computer and is almost impossible to remove without completely reloading Windows. Even worse, it also opens up your computer to further maliscious attacks.

So what’s different this time? This virus is installed on purpose when you try to play certain CDs that you have legally purchased from Sony on your Windows computer. Molly Wood at Cnet.com has a lot more coverage on this story.

What can you do? First off, don’t buy any CDs with this technology. The Electronic Frontier Foundation has a list of infected CDs. I can’t imagine that anyone reading this site would be interested in listening to any of those CDs (with the possible exception of Trey Anastasio),

If you’ve already purchased one of these CDs and played it on your Windwos computer, you can contact Sony for uninstall instructions. Also, the Anti-Spyware program PestPatrol can detect this threat. They will hopefully have a removal tool available soon.

A class action lawsuit has been filed in California and another will be filed in New York according to Brian Krebs at the Wastington Post. I’m sure everyone who purchased one of these CDs will get a few cents out of the settlement.

All I can say is thank Jobs I have a Mac now. Malicious programs like this have no effect on my computer. After working on Windows computers all day, it’s so nice to go home to a computer that just works.

I just got off the phone with Satan, he says it’s really cold down there…

Today Apple released a new iPod that also plays movies. It has a 2.5 inch color display, comes in black or white, and the 30GB model is only $299.

Also, they updated iTunes so you can . The selection of TV shows is pretty limited right now, but I’m sure it’ll fill in soon.

Finally, they’ve also updated the iMac. It’s a little thinner, a little faster, and comes with a built in iSight video camera. It also includes a SuperDrive, Mighty Mouse, and the new Apple remote control. You can pick up the 17″ model for $1299.

Hopefully Santa’s elves will have all of this figured out in time for Christmas.

Last Saturday was Early Bird practice for this year’s robotics contest. The team has been busy for the last few weeks putting together our game-winning machine.

Everything was going great… 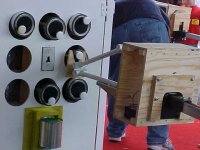 until the arm fell off. 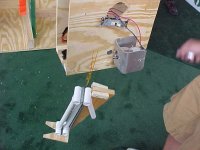 After that the guys made a few quick repairs in the parking lot. 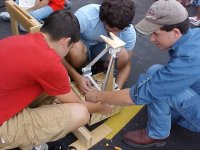 Luckily, there were plenty of free hot dogs. 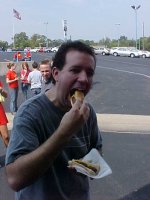 Mall Day is October 15 in Sherman. Our plan right now is for the entire robot to self-destruct, so don’t miss it.

Also, don’t worry. There aren’t any free hot dogs at the mall, so you won’t have to watch me eat them.

I’ve mentioned Cory Doctrow on this site before. He’s written some really good books like Down and Out in the Magic Kindom (one of my personal favorites). The interesting thing is he releases his books for free download on his website, and he encourages readers to convert the books into different formats for others to download.

USA Today has an article about some trends in books today. Most of the article concerns Harry Potter, but Cory Doctrow also gets a few paragraphs. Here’s a great quote from Mr. Doctrow concerning why he gives his work away:

You can tell that this guy really gets it. Don’t fight the future, embrace it. The Internet is just another tool to reach an even greater audience. It’s not stealing if no one would’ve ever paid for it in the first place.

This argument applies just as well to music. When radio first came out, many artists refused to let their songs be played. They thought that if people could listen to their music for free on the radio, no on would ever buy their album. Now, those artists are lost in obscurity, and musicians with popular songs on the radio sell the most albums.

Instead of trying to sue fans who download music, bands should be treating the Internet more like a radio station. Give songs away for free to build a larger following. I download songs to get a chance to hear a band that I can’t hear on the radio. If I like the music, I buy the CD. If I really like it, I’ll probably even buy tickets to see the band perform live.

Make great music, or write a great book, and people will pay for it. The Internet can help artists connect with those people.

If you’re involved with computers at all, I’m sure you’ve heard of jobs being outsourced to India. Here’s an article about people who are outsourcing their own work so that they basically get paid for doing nothing:

About a year ago I hired a developer in India to do my job. I pay him $12,000 out of the $67,000 I get. He’s happy to have the work. I’m happy that I have to work only 90 minutes a day just supervising the code. My employer thinks I’m telecommuting. Now I’m considering getting a second job and doing the same thing.

You can read the full article at The Times of India.

I said last night that I would talk about the other way that Linux helped us out on Monday.

This is probably a pretty common situation on business computers. We had just finished setting up our new Active Directory domain and we needed to make some configuration changes on all of our Windows 2000 and Windows XP workstations.

Here again it came down to possibly reloading Windows unless we could find a tool that would let us go in and reset the Administrator password. And again, a Linux tool saved the day.

A guy named Petter Nordahl-Hagen (I’m guessing he’s not from around here) came up with a handy boot disk called the Offline NT Password & Registry Editor. You can download an image for either a boot floppy or CD.

It’s a nice little script that walks you through the process of booting up Linux, mounting the hard drive, and then clearing the Administrator password. We’ve used it on about 40-50 computers so far and it’s worked on every one of them.

This is a very hand disk to carry around in the laptop case.

A while back I requested 10 copies of Ubuntu Linux. Ubuntu has a pretty good deal going. Not only is it free to download and install on as many computers as you want, they’ll also ship you as many copies of their software as you want for free. My CDs arrived in the mail last week. We’ll get back to them in a minute…

Friday, a transformer blew near the high school. This knocked out one leg of the power to the building. Basically, half of the circuits in the building were down. So instead of having four dedicated circuits for running everything in the server closet, we had two. I managed to patch things together and keep everything working over the weekend with the exception of one server.

The server that controls most of the network printers on the campus wouldn’t boot back up. It tried to boot then gave a blue screen of death with INACCESSIBLE_BOOT_DEVICE. This is a really bad message.

On Saturday I found out that there were also some very important files on that server, so I would have to find some way to get those files back off. I spent some time the rest of the weekend researching how to fix this problem.

The best solution to this error is to reinstall windows. That means I would also have to download drivers for the RAID controller and network card since they aren’t included with Windows NT. This would’ve probably taken a few hours.

I didn’t want to dedicate that kind of time to a server that I was planning on turning off in a few days anyway so I looked around for another solution. Luckily, I had an Ubuntu LiveCD handy.

Yesterday morning I booted from the LiveCD and everthing just worked. Ubuntu automatically detected the RAID controller and the network card. Once it finished booting up, there were icons on the desktop for all three of the hard drives in the server. I was able to copy all of the files to another server and save myself a few hours of work.

Linux helped us out a second time yesterday. I’ll get to that tomorrow…