When Paige and I first started going out, we spent a lot of our time at China Star. In those days, it was a completely different restaurant. Back then it was run by a really neat old Chinese guy. When we came in he knew us by name, and he always knew what we wanted – Paige had Empress Chicken, I had Pepper Steak, and we shared a War Wonton Soup for two. The soup was great, it had wontons, shrimp, snow peas, cabbage, and more, all in a great broth. I have lots of fond memories of those days (and not just the soup). Unfortunately, the neat old Chinese guy sold the place to someone else who turned it into a “Super Buffet”. So now there’s no more War Wonton Soup or Empress Chicken.

I’ve been casually looking around for a recipe for this War Wonton Soup for a long time. We’ve tried to make it once before with pretty good results, but it just wasn’t quite right. The other day on Slashdot.org, they were running a poll called “What’s your favorite Chinese soup”. In the discussion that followed, several people posted recipes or clever ways of using Google to find recipes. After reading this I resumed my search. I discovered that what we had been calling War Wonton Soup was more commonly called Wor Wonton Soup (note the ‘o’ instead of the ‘a’), and I found a few new recipes. Here’s a picture of the end result – 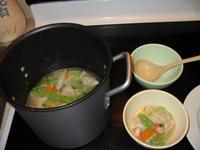 It’s still not perfect, but I think it will be after I make it a few more times. And it’s good enough now, that I don’t mind trying. Once I get it just right, I’ll share the recipe for anybody who’s interested.